Originally started in a "jam room" in Victorville, CA by Ulysses Cooney (Out of Vogue, Blazing Eye), Raymon Ruiz (Esperanza, Descarados, Marron) and Diego Irigoyen (Rogue State), they quickly compiled enough songs for a demo but needed a singer. Having all known each other from attending shows at the PCH Club in Wilmington, Ca in the late 90's, they wanted to secure someone from that same class, but someone who had yet to embrace vocal duties in a band....insert Sal Ibarra. The line up was later solidified with the addition of David Chavez on guitar and Mark Sanches (Snakes) taking over drums

"...I’ve always said that the less melody in hardcore, the better. While I do love me some Tragedy, I’m always more in favor of dark, crushing heaviness than an acoustic interlude. No unplugged instruments here, folks. All a hardcore band really needs to do to leave a lasting impression is play raw, fast, and pissed. And that’s exactly what you’ll get with this record. Straight-up “We’re not here to fuckin’ amuse you” hardcore. There’s an endless string of bands with a similar approach to this sound. But Mugre, seemingly without effort, stands out amongst the clones. Or should I say stood out. I write this the night after they played their last show ever less than a mile from where I stay. Bummer. Let this record be the final shovel full of dirt on the makeshift grave of yet another highly underrated Los Angeles hardcore band" 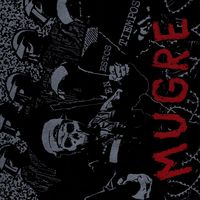